Water Horizons between Painting and Decorative Arts. Galileo Chini and other protagonists of the beginning of Twentieth century

By Stefania Cretella on Oct 11th, 2019 in Exhibitions 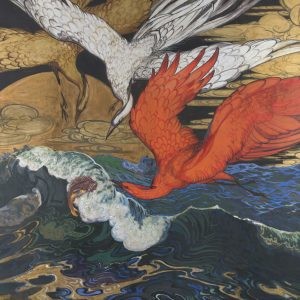 Water Horizons between Painting and Decorative Arts. Galileo Chini and other protagonists of the beginning of Twentieth century

Since 8th December 2018, the PALP (Palazzo Pretorio of Pontedera) is the location of the exhibition Water Horizons between Painting and Decorative Arts. Galileo Chini and other protagonists of the beginning of Twentieth century, curated by Filippo Bacci di Capaci and Maurizia Bonatti Bacchini and promoted by the Cultural Foundation of Pontedera, by Pontedera Municipality, by Fondazione Pisa, with the patronage of Rossana Bossaglia’s research centre and the patronage and contribution of Toscana region.

The protagonist of the exhibition is Galileo Chini, one of the most relevant figures of international Modernism, and other artists that shared with him the experiences of the period from the Symbolism to Liberty, from Wien Secession to the Orientalism. The exposition theme is water, recurrent subject in these artistic movement identified as Symbolism and Divisionism between Nineteenth and Twentieth centuries.

Water is the fil rouge for the visitor during the exposition way, and it’s the constant note during the Chini’s production and it tell the artist’s syntony with backgrounds as rivers, seas, from Arno to the Bangkok’s river, from Venice to sea and thermal centres of Viareggio, Montecatini and Salsomaggiore. It’s also part of the pottery production, the ambit that gave Chini the chance to be known as international artist and, since 1898, one of the first interpreter of Liberty in Italy: the subject from sea life fauna are protagonists of his vases, plates, tiles where the artist competed with the nature in the variety of compositions and in the chromatic yield through incredible glazes.

The painting “La quiete”, in the first room, opens the exhibition, and it had been exposed in 1901 in the fourth edition of the Biennale Internazionale of Venice, the event that more of others contributed to the artist’s success and his cosmopolitan dimension. It had been in Venice that, in 1907, the Siam’s king appreciated the set-up of the Dream Room, deciding to entrust to the artist – that distinct himself both as ceramist and illustrator, set designer, painter and decorator- for the decoration of the new Throne Palace in Bangkok. The experience in Thailand influenced his artistic knowledge, involving the easel painting, the decoration and pottery production: the direct meeting with Orient – that took him advantage the attribution by Puccini for the set-up of the Turandot- made his orientalism not on “maniera”.

The exhibition is divided into four sections: Symbolism and Divisionism, Water as subject of decorative production, Orientalism and the Secession and Klimt phases; each of everyone has its own paintings, sketches and ceramic artefacts making the visitor understands the difficulty of Galileo Chini’s activity. Near him, constantly confronting, the artworks of other great protagonists of the Italian Eighteenth century, related by friendship, work or cultural harmony: Plinio Nomellini, brotherhood friend, with whom he shared the endeavour of the Dream Room; Giorgio Kienerk, that was a untimely disseminator of the Liberty in the Tuscan ambit; Leonardo Bistolfi, one of the promotors of the Esposizione Internazionale d’Arte Decorativa Moderna organized in Turin in 1902; Duilio Cambellotti, the best representant of Decò in Rome, and also the Emilian Aroldo Bonzagni and the Tuscans Moses Levy, Lorenzo Viani and Salvino Tofanari.  In the exposition there is also a tapestry made by Vittorio Zecchin, the Venetian artist that more of others translated in Italy the Klimt’s spirit and, as Chini, he filtered the decorative language of the Wiener Secession. There is also a magnificent finding: the Auguste Rodin’s plaster La Danaide, exchange object between the sculptor and Galileo Chini for their meeting occasion, that probably took place in Venice in 1901.